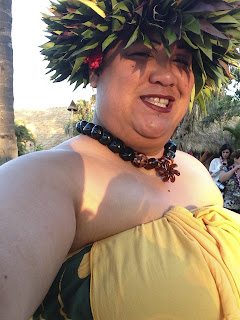 Amazing Gracie, got to thank her for this moment.  We were trying to take a photo of our selves, it was the "golden" moment of the day... the setting perfect at the Old Lahaina Luau.  When we hear this voice behind us... "Want me to take your photo?"  We turn around and there is Gracie, big smiles, big attitude, all Hawaiian.  Who are we to say no... So we hand her our camera and she says "First things, First"  And then proceeds to snap off a few photos of her self  All the while telling us that we need mementos of  HERSELF!  Of course she was right.  After she was done snapping pics of self then she decided she wanted a portrait moment of all of us.  Finally when satisfied she took one photo of us, handed our camera back and left.  Never laughed so hard at a "photo shoot" nor had such a competent take charge multi-personalitied director. 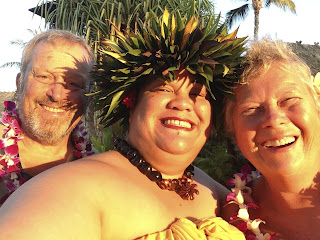 A week or so later we were at "the WEDDING" beach.  This has become a favorite thing to do in the evening - watch the multiple wedding parties have their weddings performed and photo shoots taken at sunset.  Very entertaining.  One night we saw the number one photo shoot ever.  It was a lovely young couple all dressed up in traditional garments... They were at the far side of Kapalua Bay and working their way around of the horseshoe shaped beach towards us.  Did I tell you that the groom was also the cameraman?  He had his camera on a tripod - would position his bride, set the camera, run back, straigten his hair, get in position.... flash, photo taken.  By the time he came around to our side they were doing the more complicated traditional poses - kissing, bride held in grooms arms, etc.  Crazy fun to watch. 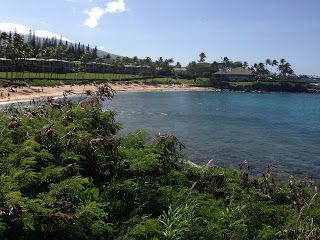 Well a few weeks later as Gary and I were watching more couples get married on shore we started to goof around and think about money making ventures.  We decided we could become "The Unique Wedding Package".  I, as a minister would perform the ceremony, Gary would be the photographer, Max would add the unique crazy element and Gracie could be Gracie and add whatever she wanted.

So I ask ya'll how many of you would like to participate in our wedding events?  Bring the wedding certificate and it could be real... don't and we can pretend while having loads of fun.
Posted by GPSWorldTraveler at 2:30 PM

I miss you a lot. Love Gracie love new wedding jobs thank you for including me in your amazing journeys. Wow what a glorious life you both have created. Did you move from Duvall.
All my love
Susie